We would be wise even today to admit that it is much better to give a soft [as opposed to harsh] answer because we will be more successful in our attempts to persuade others of the truth, be more likely to have others actually hear what we are saying, and have a greater chance for making friends while diminishing the chance of making more enemies. Even when others have spoken or acted harshly towards us, the soft answer will prevent [or at least hinder] an escalation of the conflict or strife, whereas a harsh retort would only prolong it and incite further anger. In most situations, this proverbial instruction would be worth heeding.

The wise writer would comment further on the need for a soft answer, reminding us, “It is honorable for a man to stop striving, since any fool can start a quarrel” (Proverbs 20:3). Many men continually prove themselves foolish in this matter, for they just cannot let someone else insult them or get in the last, harsh word. But there is no honor is continuing strife by answering with harsh words when a soft answer would end the strife. There is no honor in being able to arrogantly say, "I sure showed him, didn't I?" I repeat, there is no honor in this.

And it is disappointing to hear adults who are involved in the pettiest of disputes and differences resort to harsh words. What is worse is when they are confronted, they excuse themselves by acting like a four-year-old, saying, "He said [harsh words] first!" Like that then gives us an excuse for harshness? Surely we can do better than that! Have we not learned the application of "The Golden Rule"? Do we not comprehend the meaning of Jesus' words when He said, “Therefore, whatever you want men to do to you, do also to them” (Matthew 7:12)? I cannot say it enough, and it is something we should never forget: It doesn't matter what anyone else does, we must do the right thing.

Children must learn from a young age that they should give a soft answer in reply to the harsh words of their friends and playmates. They must learn young so when they get older and the words get harsher, they are not tempted to return them in kind. Teenagers can often be very cruel and unkind in their words, but returning harsh words does not ever make things better. And when they move out into the working world, they will continue to meet those who are adept at spewing harsh and unkind words, and if they have learned to respond with a soft answer, it will prevent unhealthy conflicts and set a good example to those who see it.

It is the "in" thing nowadays to have "conflict resolution" classes, but most all conflict could be either ended or avoided altogether if we would just train our children to give a soft answer, and show them by example. Parents are not exempt from the need to give soft answers! When your teenager talks back or is simply disobedient, it is very tempting to yell and get angry, but this will only prolong the conflict. Some parents never see themselves as the cause for the continued conflict, but only justify themselves by saying, "They did it first!" The same excuse they used when they were four years old and their big brother took their favorite toy. It doesn't sound any more "grown up" than when you were four years old and it still does not justify harshness!

Abigail is a wonderful example of giving a soft answer and turning away wrath. Her good-for-nothing husband, Nabal, had refused food for David and his men and sent them away (I Samuel 25:4-12). In his answer, Nabal did not bother to speak kindly to them, either. One of Nabal's own men reported this to Abigail and said that Nabal had “reviled them” (I Samuel 25:14). When David heard Nabal's response, he gathered 400 of his men together [with their swords] and went to "convince" Nabal otherwise. 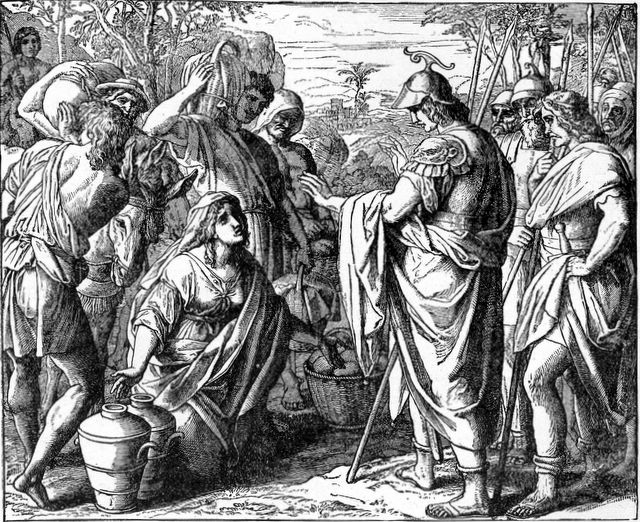 Abigail was far wiser than her husband in such matters and met David as he was coming to destroy Nabal. Abigail gave a soft answer and did, indeed, turn away the wrath of David (I Samuel 25:18-35). If only our political leaders could see the wisdom in soft answers, rather than the habit of boastful arrogance about who has the biggest stick or the most dangerous weapon or whose fighters were the most bloodthirsty! How many lives could be saved?

But let us now turn to another form of “a soft answer.” This one, though, is not what the wise writer meant at all, but a modern "interpretation" that is becoming increasingly popular among some preaching brethren. This “soft answer” is hailed as the cure for all conflict and purported to be the "true, Christ-like spirit." The “soft answer” of which I now speak is, in fact, contrary to plain Bible teaching, but it is promoted as such and any who dares expose it as false are, of course, guilty of "harsh words"!

It seems many brethren are now "interpreting" the wise writer's words to mean that we should never say anything that might offend. That's right! And what, exactly, are some of these "offensive words"? Some are now saying we cannot say those who deny baptism for the remission of sins are in error; some do not believe that we should point out the error of the "day-age" theory of creation; some say we should welcome any and all teachings on the subject of marriage, divorce, and remarriage [and the individuals and couples who have followed those erroneous teachings and who are now living in adulterous relationships]; and some argue "since we are not perfectly correct on all religious issues, we can never say with absolute certainty we are right on any particular issue." All of these arguments have been presented and argued and anyone who refuses to cow to their "reasoning" is quickly labeled as "harsh" because they are unafraid to name names and expose error. [I wonder, though, why they will argue their correctness, since they simultaneously argue against absolute certainty on any one issue. Are they certain we cannot be certain?]

It seems the “soft answer” for which they stand is really soft preaching. They don't want anyone to say anything that might offend, or seem like there really is one God, one Christ, and one church. Forbid that anyone should stand firmly on the word of God, which tells us “There is one body and one Spirit, just as you were called in one hope of your calling; one Lord, one faith, one baptism; one God and Father of all, who is above all, and through all, and in you all” (Ephesians 4:4-6).  Why, that is harsh and exclusive! If we say there is only one true church belonging to Christ, that might offend someone! If we say that the false and blasphemous doctrine of "once saved, always saved" or any other part of that Calvinistic doctrine is repulsive to the mind of God, that is harsh!

What they mean is, "That is not palatable." Yes, I guess it would seem "harsh" to those who reject the pure teaching of the New Testament of Jesus Christ; those who defend the creeds of men will be offended and it will "exclude" them from salvation. But friends and brethren, it is the truth. If I am your enemy [or anyone else's enemy] because I speak the truth, so be it (Galatians 4:16) . I take no pleasure in it and it is not my intent to offend; my aim is to tell you what God would have us to do to be saved, how we should live on this earth, and what we should expect whether we obey or disobey those words. To some, those words will be harsh words, but to some who love the truth and who genuinely love the Lord, those words will be received gladly and “with all readiness” and they will respond positively to it, obeying the will of the Lord. The "harsh" reality is, not all will accept it.