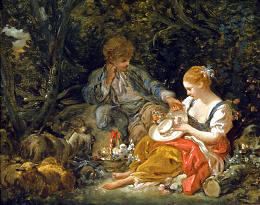 A happy home being with a wise choice of a marriage partner. We therefore submit the following questions as a guide for our young people as they seek out their companion for life.

God's law is that only those who are divorced for the cause of fornication have a right to remarry. "And I say to you, whoever divorces his wife, except for sexual immorality, and marries another, commits adultery, and whoever marries her who is divorced commits adultery" (Matthew 19:9). If one's marriage partner is guilty of marital infidelity, he can put that partner away for that cause, and marry another. If the divorce is for any other cause, he is ineligible for marriage.

b. Problems in giving. The young lady loves the Lord and His work, and wants to give liberally in support of it. Her husband, however, does not share her convictions. He feels that a dollar is plenty to give.

c. Problems in training children. Some have succeeded in bringing up their children to be Christians without the help of their companions. Eunice succeeded with Timothy. But the influence of a father is great, and many are the women who have not been able to overcome this influence to see their children become Christians.

d. Problems in overcoming the influence of one's companion. Marrying with the hope of reforming one's companion is a dangerous thing. Often the companion is lifted to a higher standard, but seldom to the standard of a Christian. Instead, as the non-Christian's standards are raised, the Christian's standards are lowered, so that the two meet somewhere in between. The young lady should realize that the man she marries will be the greatest influence of an earthly nature on her life, and she should ask herself, "Will this man help me to go to heaven?"

e. Emotional problems. Recently a godly woman, having just received word of her husband's death in an automobile accident, cried, "Why couldn't it have been me or one of the children, for my husband was not ready to die?"

Is the reader thinking she will convert her husband after marriage? She may be able to do so, but statistics show that her chances are not very good. The risk is too great. The only safe course is for Christians to marry Christians.

3. Does this person possess strength of character? Many boys and girls seem to want to do right, but are just too easily influenced by their associates or by the circumstances which surround them. Such weakness of character does not make for a good marriage partner. If one wants a happy home, he should choose a companion who is dependable, whose word can be trusted, who has the strength to do right, even when all around him are doing wrong.

After all, if that young man or woman lies to his parents or employer, he will some day lie to you. If he is excessively jealous and possessive during courtship, he will manifest the same weaknesses after marriage. If he is quick-tempered -- or flirty -- or a "show-off" -- or a spendthrift -- or a "tightwad" -- now, he will be after marriage. One cannot marry a moral weakling, and expect a happy home.

Yes, there will be faults and eccentricities that must be accepted and tolerated in any happy relationship between two people. But there are certain conditions that are practically intolerable, and we hope that this article will help some young person avoid such.