What is the Sea of Bronze?
Page Menu

What is the Sea Of Bronze? 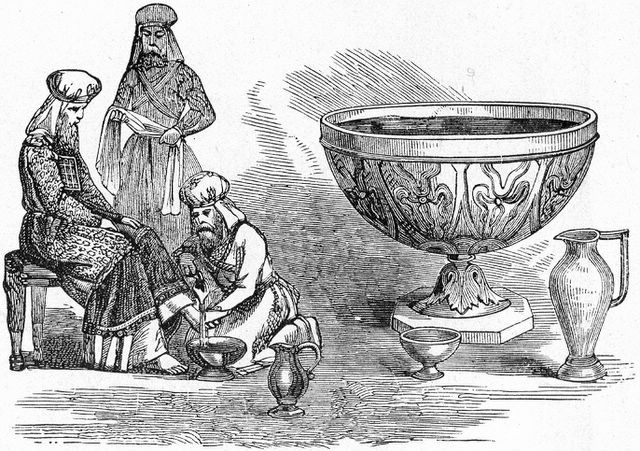 One of the furnishings in the tabernacle and the temple was a laver to hold water so that God's requirements for the priests to wash before doing certain ceremonies could be done. "You shall also make a laver of bronze, with its base also of bronze, for washing. You shall put it between the tabernacle of meeting and the altar. And you shall put water in it, for Aaron and his sons shall wash their hands and their feet in water from it. When they go into the tabernacle of meeting, or when they come near the altar to minister, to burn an offering made by fire to the LORD, they shall wash with water, lest they die. So they shall wash their hands and their feet, lest they die. And it shall be a statute forever to them-to him and his descendants throughout their generations" (Exodus 30:18-21). The one made for the tabernacle was not very big as it had to be carried around.

When Solomon built the temple, he made a very large laver; so large that it was called a "sea." "And he made the Sea of cast bronze, ten cubits from one brim to the other; it was completely round. Its height was five cubits, and a line of thirty cubits measured its circumference. Below its brim were ornamental buds encircling it all around, ten to a cubit, all the way around the Sea. The ornamental buds were cast in two rows when it was cast. It stood on twelve oxen: three looking toward the north, three looking toward the west, three looking toward the south, and three looking toward the east; the Sea was set upon them, and all their back parts pointed inward. It was a handbreadth thick; and its brim was shaped like the brim of a cup, like a lily blossom. It contained two thousand baths" (I Kings 7:23-26). To give you a rough idea how big it was, it was 18 feet in diameter (probably bigger than your living room) and held 16,000 gallons of water.