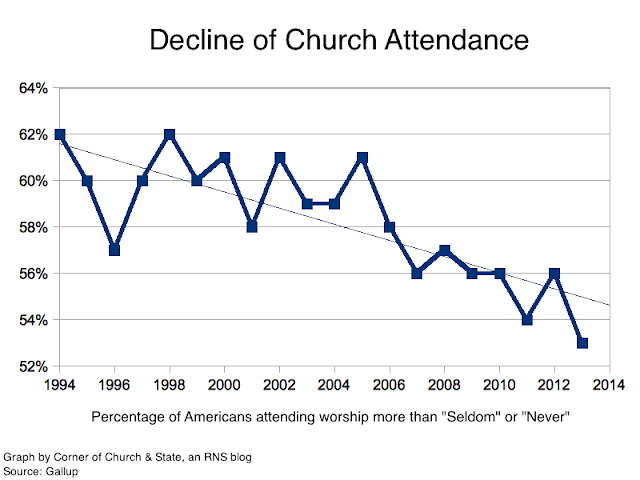 Recently, there's been a lot of chatter on my Facebook feed about a survey of churches of Christ conducted by an organization called 21st Century Christian.  According to this survey, attendance in such churches has declined by about 10 percent since 1990.

I have no idea how valid their data are.  Based on what I know, I suspect the answer is "Not very".  They did have an entry for the Joliet church, but it was way off, and, at a guess, has not been updated since about 1995.  Of course, the Joliet church is quite a bit smaller than it was in 1995, so that doesn't do much to dispel the picture of church decline!  In fact, I believe that non-institutional churches in the Chicago area are generally smaller than they were 25 years ago.  On the other hand, I'm familiar with churches in Texas that are quite a bit larger than they were 25 years ago, so I'm not sure what any of it proves.  The plural of "anecdote" is not "data".

Methodological quibbles aside, it does appear true to me that at least some churches are declining, and all of the various posts and articles on the decline did their best to point to underlying causes and provide solutions.  However, I didn't see one that pointed to what I see as the largest problem:  the absence of qualified elders in every church.

A good friend of mine, Steve Wolfgang, makes a habit of asking brethren to estimate what percentage of churches have elders.  This is utterly unscientific, of course, but through the years, the estimates he's heard have ranged from a quarter to a third.  It's reasonable to conclude, then, that somewhere between 66 and 75 percent of congregations of the Lord's people do not have elders.

Most churches of Christ will loudly proclaim their devotion to the first-century pattern, but this is probably their most striking deviation from it.  Acts 14 speaks of Paul and Barnabas appointing elders in every church, but we can't manage elderships in even half of ours!  It is undeniably part of God's plan for churches to have elders, and churches without elders cannot expect to flourish like those that do have them.

In particular, elders provide three things that are necessary for churches to thrive:

Leadership.  During my time at Joliet, I've both worked under an eldership and worked without one, and it was infinitely easier for the congregation to have a purpose and plan with elders.  Business meetings, despite the goodwill of the men involved, are not planning organizations.  They are maintaining organizations.  At best, they succeed in preserving the status quo, and usually even that isn't very efficient.  Elders, by contrast, can assess the situation of the church and come up with a systematic way of meeting its needs.

Elders also have the moral authority to put a plan into practice.  In my experience, there is a vast gulf between getting up in the pulpit and saying, "Here's what the elders have decided we should do" and saying "Here's what I've decided/the men have decided we should do."  In both of the latter cases, the unspoken response is often a very loud, "Who are you to tell me what to do?"  I never got that sense when I was relaying the decisions the elders had made.

My brother isn't even a Christian, but as a general in the Army Reserve, he has a pretty good grasp of organizational dynamics and is a smart dude besides.  When my family was talking about elders over Christmas vacation, he observed that churches that don't have elders will most likely continue not to have elders.  They don't know what elders look like, they don't know how they function, and they don't know how to develop them.  What's more, even churches that have had elders recently will begin to forget what having elders is like.  Those things aren't barriers to the development of an eldership, but they are hurdles to overcome.

Compassion.  Back when I was a green-as-grass trainee at the Dowlen Road church in Beaumont, Texas, I was invited to sit in on an elders' meeting.  After the meeting broke up, the elders spent the rest of the evening visiting members of the congregation who were struggling spiritually.

At the time, this struck me as extraordinarily inefficient.  Couldn't the other members of the congregation be working with those weak Christians while the elders sat around making Important Decisions?  I shared my insight with my mentor, Max Dawson, and he dryly replied that the elders would be happy to turn the visiting over to somebody else just as soon as they found members who were willing and able to do it.

In my immaturity and ignorance, I had failed to recognize one of the hallmarks of the elder.  To be blunt, most Christians (myself included) don't care enough about the spiritual welfare of their brethren to make a significant investment of time and energy in helping them, and it's unrealistic to expect them to do so.  Even in the rare instances where a non-elder does care enough (as with Timothy in Philippians 2:19-20), that concern is often not matched by a corresponding willingness to confront ungodliness and tell hard truths (as with Timothy in 2 Timothy 1:6-8).  That's simply not a level of spiritual performance that a man is going to reach unless he has also attained the qualifications of eldership.

It is this constant, patient labor, usually behind the scenes, usually thankless, that benefits the church perhaps most of all.  The work of the elder in tending the sheep is like oxygen.  You probably don't think about it until it's gone, but once it's gone, boy, do you ever notice!

In my 10 years at Joliet, by far the biggest spiritual hurdle we've had to overcome was the dissolution of our eldership.  Before the elders stepped down, we were averaging 115 on Sunday morning.  A year later, we were down to 75.  What else is there to say?

Because elders are so important to the functioning of a church, my suggestions for reversing church decline all involve elders.  They are as follows:

Of the two, the second may well be an even larger problem than the first.  Over time, we've grown accustomed to the notion that having business meetings is an acceptable substitute for having elders, and that is categorically false.  A congregation that does not have elders should not dismiss the problem with a shrug and an "Oh, that's too bad."  Instead, it should regard the lack of shepherds as the congregation's single biggest weakness and work diligently to address it.

Seek the eldership.  It should be the goal of any congregation without elders to get (qualified) elders, as quickly as possible, using every Scriptural means available.  No option here should be off the table.  If the congregation is in "Grow your own" mode, that should be a point of heavy and repeated emphasis.  From the pulpit and in classes, there should be constant teaching on the qualifications of elders and what men ought to be doing to attain to them.  Sitting around and hoping that elders will serendipitously appear isn't going to cut it.

Nor should churches shy away even from joining forces with other congregations in the area if an eldership will result.  The math here is pretty simple.  If there are two congregations with 60 people each, 10 miles away from each other, they probably aren't going to have the numbers they need to keep an eldership on an ongoing basis.  However, a single congregation with 120 probably will.  When the benefits are so obvious, who are we to allow attachments to a particular meeting place to stand in God's way?

Maintain the eldership.  I've heard it said that in the business world, one of the primary jobs of every executive is to train his replacement.  That certainly should be true of elders.  It's true of preachers and elders both, I think, that we too often find ourselves focusing on the weak to the detriment of the strong.  We get so busy putting out fires that we forget to train firemen.

Instead, elders should take the time (out of their abundant free time, I know) to mentor promising young men.  Show them the ropes a little bit.  Teach them.  Encourage them to take a small role in looking after the flock.  To make a basketball analogy, they might not be ready for 30 minutes a game, but they can learn a lot from 5.  Then, they can progress to 10 minutes, then 15, then 20.  When the time comes, they'll be able to assume the role of elders themselves, and they'll be much better equipped to fulfill it than they would have been if they'd spent the past 25 years warming the bench.

None of this is terribly original.  After all, it's about an office that's as old as the church is.  However, I believe that this ancient answer is the best solution to today's church problems.  To paraphrase Chesterton, having "elders in every church" has not been tried and found wanting.  It has been found difficult and not tried.  If we're able to reverse that trend, I'm confident we'll be able to reverse a lot of other trends too.