How did you locate Pi Hahiroth, Migdol, and Baal Zephron?
Page Menu

In surfing the net I located your map of the crossing of the Red Sea - your map shows the possible locations of the towns mentioned in Exodus 14:2 - Pi Hahiroth , Migdol and Baal Zephon. Where exactly has your research been located as the maps in the back of my Bibles do not show the locations of these towns.

"Speak to the children of Israel, that they turn and camp before Pi Hahiroth, between Migdol and the sea, opposite Baal Zephon; you shall camp before it by the sea" (Exodus 14:2).

None of these three places have been located by archeologists, thus their approximate location must be determined by the clues given in the Scriptures. On the map, I indicated the uncertainty by placing question marks after the names.

We know the locations were not on the main routes. "Then it came to pass, when Pharaoh had let the people go, that God did not lead them by way of the land of the Philistines, although that was near; for God said, "Lest perhaps the people change their minds when they see war, and return to Egypt." So God led the people around by way of the wilderness of the Red Sea. And the children of Israel went up in orderly ranks out of the land of Egypt" (Exodus 13:17-18).

The journey is also recounted in Numbers. "Then the children of Israel moved from Rameses and camped at Succoth. They departed from Succoth and camped at Etham, which is on the edge of the wilderness. They moved from Etham and turned back to Pi Hahiroth, which is east of Baal Zephon; and they camped near Migdol. They departed from before Hahiroth and passed through the midst of the sea into the wilderness, went three days' journey in the Wilderness of Etham, and camped at Marah" (Numbers 33:5-8). Notice that to get from Etham to Pi Hahiroth, the Israelites reversed the general direction that they were going (eastward). Therefore, Pi Hahiroth must be roughly west of Etham.

Many maps will place the locations north of the Red Sea by the large shallow lake at the tip of the Red Sea known as the Bitter Lake. However, this does not match the description of the area. Remember that Pharaoh believed he had the Israelites trapped where they could not escape. Most of the "popular" routes place the Israelites next to major trade routes (for instance there was one between the Bitter Lake and the tip of the Red Sea. If this was the location, then how did Pharaoh have the people trapped?

Adam Clarke: "pi hachiroth, the mouth, strait, or bay of Chiroth. Between Migdol, ldgm migdol, the tower, probably a fortress that served to defend the bay. Over against Baal-zephon, Npu leb baal tsephon, the lord or master of the watch, probably an idol temple, where a continual guard, watch, or light was kept up for the defence of one part of the haven, or as a guide to ships. Dr. Shaw thinks that chiroth may denote the valley which extended itself from the wilderness of Etham to the Red Sea, and that the part in which the Israelites encamped was called Pi-hachiroth, i.e., the mouth or bay of Chiroth. See his Travels, p. 310, and his account at the end of Exodus."

Jamieson-Fassett-Brown Commentary: "The Israelites had now completed their three days' journey, and at Etham the decisive step would have to be taken whether they would celebrate their intended feast and return, or march onwards by the head of the Red Sea into the desert, with a view to a final departure. They were already on the borders of the desert, and a short march would have placed them beyond the reach of pursuit, as the chariots of Egypt could have made little progress over dry and yielding sand. But at Etham, instead of pursuing their journey eastward with the sea on their right, they were suddenly commanded to diverge to the south, keeping the gulf on their left; a route which not only detained them lingering on the confines of Egypt, but, in adopting it, they actually turned their backs on the land of which they had set out to obtain the possession. A movement so unexpected, and of which the ultimate design was carefully concealed, could not but excite the astonishment of all, even of Moses himself, although, from his implicit faith in the wisdom and power of his heavenly Guide, he obeyed. The object was to entice Pharaoh to pursue, in order that the moral effect, which the judgments on Egypt had produced in releasing God's people from bondage, might be still further extended over the nations by the awful events transacted at the Red Sea."

International Standard Bible Encyclopedia: "Neither Pi-Hahiroth nor any other place mentioned with it can be exactly located. A recent discovery of manuscripts in Egypt furnishes a mention of this place, but affords very little assistance in locating it, nothing comparable to the account in the Bible itself. If any one of the places mentioned in connection with the crossing of the Red Sea could be located approximately, all the others could, also, be similarly located by the description given in the account in Exodus. The route beyond the Sea has been made out with almost positive certainty. A journey along the way is so convincing that hardly anything can shake the conviction which it produces. This identification of the route of the exodus beyond the Sea requires the place of the crossing to be within 3 days' journey of Marah, which puts it somewhere near the modern Suez. It may be anywhere within 10 miles of that point. This approximately locates all the other places mentioned in connection with the crossing: Migdol must be Ras 'Ataqah, or some other high point in the mountains of the western deserts, where might be placed a watchtower. Pi-Hahiroth is between this point and the Sea and Baal-zephon near the opposite eastern shore. This puts Pi-Hahiroth at some point along the old shore line of the Sea within 10 miles of the site of modern Suez."

As a rough approximation, I used a map from Standard Bible Atlas, Second Edition. Of all the maps I examined, this one is the only one that traced a route that reasonably matched the clues stated in the Scriptures. The route puts the Israelites in a wide valley between two mountainous areas on the edge of the Red Sea. 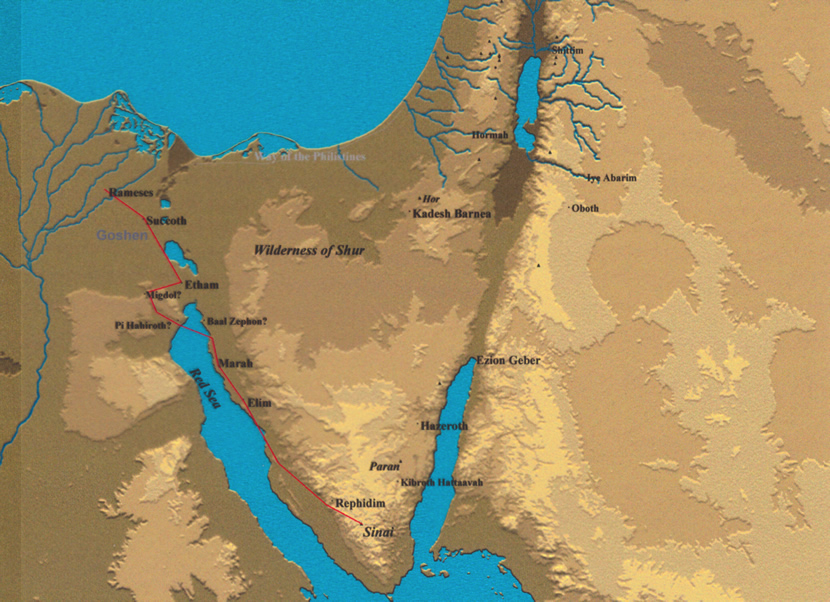